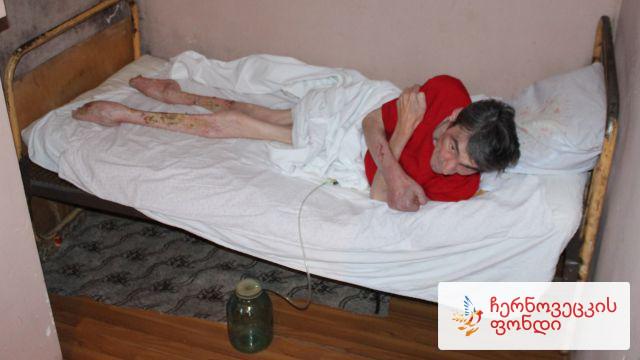 August 21, 2017
The miner did not manage to find a new job. For this reason he started to have depression; stress caused heart and blood-vessel diseases.
Follow the project Remind me

₾ 332
31
Donors
donated
Project completed!
How else can I help?

Some people have never thought why they need to make good things and help other people. They have no idea how apparently beneficial could be one's good deeds, as good actions always have good consequences.

Gela Chinchaladze is a native citizen of Chiatura city. Since he was a boy he had been working at a coal mining pit, he earned his living by honest but hardest labor. He supported his family and helped his neighbors...

But in 2004 he lost his job, his mine was closed. The miner did not manage to find a new job. For this reason he started to have depression; stress caused heart and blood-vessel diseases.

One fatal day Gela Chinchaladze lost consciousness and fell out of the 4-th floor balcony. By the God's will he left alive! But for already 13 years this poor person is bedridden, and as his wife tells, suffers with unbearable pain and is rotting alive.

Judge by yourselves: his legs are paralyzed, blood wounds and bed sores appeared "eating up" the  weakened organism of the young man.

After the tragic event with his father all the family duties lay upon the son. He struggled for his father, he tried to earn at least some money so that his father did not run out of medicines, but, as they say, sorrow never comes alone... A couple of years ago he got into a car accident. He survived but became unable to work.

Mr. Gela lives in a small apartment together with his wife, son, daughter-in-law and two grandchildren. Their income is a tiny pension and a social allowance. It is hardly enough for bread.

It is not just hard, but painful as well to have a bedridden person at home. Especially when you are unable to help and you just observe the slow death of a person dear to you. A person who used to be the family's support and hope.

It is almost impossible already to put Gela Chinchaladze on his legs. But we do can save his life! We can do this if you show compassion and sympathy towards him.

We ask you to take the condition of Gela Chinchaladze close to your hear and donate medicines, food, bed linen, hygiene products and a pressure reducing mattress for this helpless person. We can soothe his pain and suffering! We can make his life longer!

Be close to people who you could save, as by doing this you become closer to God! 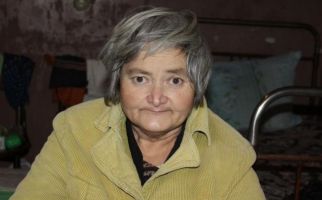 Ill adults
I’ll go up the wall with pain!
Nona Turashvili, 53, plains. Her voice is constantly trembling. She does her best to hold back her tears, but at some point, the poor woman can't stand it. She puts her head on her hands and bursts into tears... There is so much grief and pain! She keeps crying...
donated
₾ 1,423
supporters
103
Donate

Ill adults
Georgian lepers living in hell!
Friends, when you see what a life these unfortunates have, you will certainly get horrified! They are lepers. Not for us - people who know that there is God, but for officials who are obliged to help them! Will we leave them in trouble and turn our backs on them as well? Just look at the photo.
donated
₾ 5,078
supporters
282
Donate

Ill adults
I know where God lives!
Mariam is having a hard time. She is ill. She is not like others. She can talk, read, write, dream, like her peers, but since her childhood she cannot walk. Can you imagine, friends, how hard it is for her family, living in in complete poverty, to see her suffering? They are so poor that they cannot help her!
donated
₾ 2,310
supporters
165
Donate 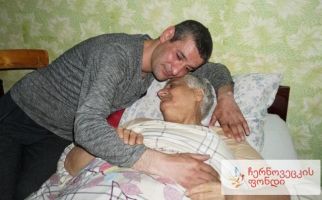 Ill adults
They lived an excruciatingly long time and...
Such an ending would be just right for this story. Don't you believe me? Then take a few minutes to read a story about all the horrors in the life of an old and sick woman and her loving son.
donated
₾ 1,821
supporters
112
Donate 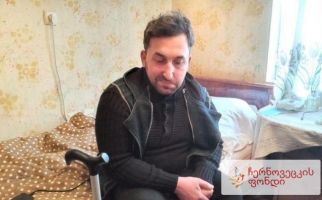 Ill adults
Superfluous man in Georgia.
“Sometimes I dream that I'm walking again... Then I open my eyes and try to move my leg and arm. But nothing comes of it... It hurts when I realize that that was just a dream. And I get depressed. It feels like I became a hostage to my own body,” - says 31-year-old Goga Berishvili. The man’s eyes get wet. He tries to hide them, but you can hear despair in his every word.
donated
₾ 1,737
supporters
138
Donate 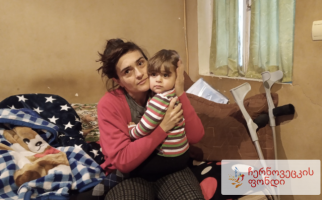 Ill adults
I’ll voluntarily stare death in the eye for...
- I will be operated on for the seventh time - and I almost certainly will not survive the operation! I experienced clinical death four times...I am ready to die for the sake of my baby, but how will he live without me, dear people? Nobody will kiss him so tenderly; nobody will hold him to heart like his mother ... - Lord, save my life! - she asks God. - Let the operation be successful! - the brave lady named Lela says to me! This is she who deserves medal! She is a real heroine!
donated
₾ 3,484
supporters
258
Donate 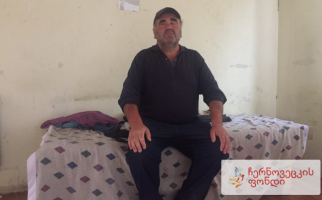 Ill adults
When I've gone blind, it seemed like they...
“I wake up, sit down ... While sitting I say to myself: “Well, are you still alive? Can we handle it today? Do you want to eat? Let's go shopping". It has lasted 11 years! After my TV went out of order, I have been lost completely. I don't know when the day comes, when the night comes, what date it is. I go out and wait until someone greets me to ask them what day it is, what time it is, what is happening in the world ... Then I pick myself up, take my stick and go to the nearest store to buy some bread. Though I'm blind, I still need food. The store seems to be close, but it takes me three hours to get there. Sometimes a cow butts me, or I run into something, fall down, lose my orientation, turn off the road...
donated
₾ 4,220
supporters
283
Donate 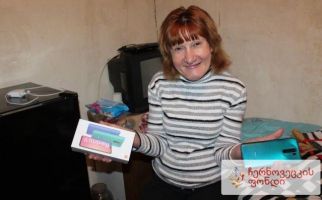 Ill adults
If I die, no one will even know about it...
"I worked all my life, fighting for survival... This accursed disease broke me, deprived me of the opportunity to earn the bread for the day" sighs Lela, 51. At the age of 43, when the poor woman worked at a construction site, a large board fell on her head. Soon she had a stroke... Lela was left speechless for a long time. As a result, she is disabled, changing rented apartments, living in terrible conditions, suffering from loneliness, hunger, cold ... And she has absolutely no one to ask for help.
donated
₾ 1,693
supporters
118
Donate 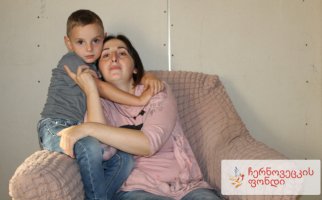 Ill adults
I don't know if when I wake up I will...
“Pain stabs me again and again ... And every step is like torture ...” - says Teona, mother of 5-year-old Demetre and 14-year-old Luka. Her eyes are full of tears and inconsolable despair. "Everything I love hangs in the balance ... Doctors have not been able to diagnose me for more than a year, and we have already spent absolutely everything on consultations, tests, examinations, and there is still no end to this ... Oh woe, woe!" Teona raised her eyes to the sky, and tears streamed down her cheeks. “Mommy, I won't give you to anyone, ever,” says 5-year-old Demetre and hugs his mom tightly. What is multiple sclerosis? Teona answers this way: "Tomorrow, when I wake up, I don't know if I will remember that these are my children ..."
donated
₾ 1,361
supporters
78
Donate